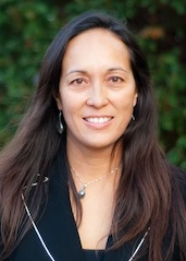 Isabelle is the Director of Montessori International Preschool. She is also the founder and owner of the two preschools in Valby and Frederiksberg.

Isabelle is half-French and half-Filipino and she was born in Canada. She has studied and worked in several countries: France, Philippines, Canada, Spain, Italy, Japan and the UK. She moved to Copenhagen in May 2008 with her husband Luke and their two children, Zachary (born in 2004) and Elodie (born in 2007). They are very well settled in Copenhagen and are planning to stay here for the long term.

Isabelle has worked in many industries and was an English teacher at a Japanese middle school for two years. She has also worked in finance, logistics, publishing, event planning and hotel management. Isabelle is also a certified Reflexologist, specialised in maternity reflexology. She has an MBA in International Business, a BA in English and Communications as well as a degree in Hotel Management.

Having moved around a lot as a child and having children of her own, Isabelle understands the importance of parents wanting a structured as well as safe and nurturing environment for their little ones. She is devoted to helping children develop independence, an open-mind and an acceptance of other cultures and customs. She believes that it is one of the building blocks to developing a flexible attitude in order to properly face the ever-changing world.

MONTESSORI TEAM AT THE VALBY PRESCHOOL

MONTESSORI TEAM AT THE FREDERIKSBERG PRESCHOOL