The Montessori philosophy is based on a profound respect for each child as a unique human being. Our approach assumes that children are born intelligent, curious, creative and are ripe to develop a sense of wonder and imagination. The goal is not to control, but to inspire our children to learn voluntarily. In its essence, Montessori is designed to teach children to think deeply, to think for themselves and to think about others. We believe that learning how to think for oneself (in effect, learning how to learn) will get a child through both school and life.

Maria Montessori believed that children are natural learners and little teachers. Children work for the joy of the process rather than for the end result, and children are excited and energized through work. A child may repeat activities over and over until an inner need is fulfilled. 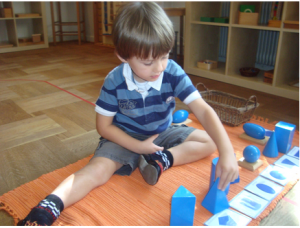 Maria Montessori, born 1870 in Italy, was one the most influential educators in the 20th century. She was the first woman Medical Doctor in Italy and was one of the great pioneers in the study of child development. Upon graduation from Rome University Medical School in 1896, she worked with mentally deficient children, which reflected not only compassion, but also a rigorous scientific ability. She became a lecturer at Rome University and set down the foundation of scientific pedagogy in Italy.

In 1905, Dr. Montessori began her innovative approach with a group of children in the slum area of San Lorenzo in Rome. Within a year, her accomplishments with these children earned worldwide acclaim and became a landmark in the education of young children. What ultimately became the Montessori method of education developed there, based upon Montessori’s scientific observations of these children’s almost effortless ability to absorb knowledge from their surroundings, as well as their tireless interest in manipulating materials. Every piece of equipment, every exercise, every method Montessori developed was based on what she observed children to do “naturally,” by themselves, unassisted by adults.

She wrote 25 books on the various aspects of her theory and practice, and formulated her approach for elementary children in 1912. Her unique ability to observe children and gain insight into their development led her to design the education method which is known throughout the world as Montessori education.

Children teach themselves. This simple but profound truth inspired Montessori’s lifelong pursuit of educational reform, methodology, psychology, teaching, and teacher training—all based on her dedication to furthering the self-creating process of the child.
Today, nearly 100 years later, her schools continue to thrive and expand, a tribute to her inspirational insight, which has helped change the course of childhood education.